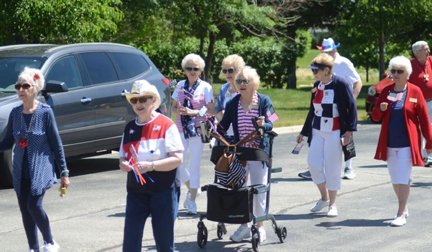 In honor of the Olympics in Japan, the residents of Smith Crossing in Orland Park played volleyball and shuffleboard, tossed a hammer and more for the gold, silver and bronze.

The five-day celebration opened June 14 with a parade and the ceremonial handing of the torch to resident Jim Nemec.

“Nobody else volunteered,” he joked.

Nemec, however, is notable because he was on a board that helped bring Smith Crossing Orland Park.
Nemec said he spent a few years trying to persuade board members who already ran a Smith facility in Chicago to expand to Orland Park.

When he first saw the property in the late 1990s, he described it as “muddy … very muddy.”

But it’s clear now that his work in bringing the center to the village was huge.

Also participating in the parade is the Old Spokes Clubs, a group of riders using recumbent tricycles. The club formed when resident Don Ryan received one of the trikes for Father’s Day last year.

“I wanted a two-wheeler, and the kids said ‘no’ and gave me a three-wheeler,” the 89-year-old Ryan said. “The residents here all followed me. They are like the Energizer Bunnies. They do everything. I just follow instructions.”

Julie Lewis, 76, was a marketing guru who helped get the word out on Smith Crossing in its infancy. Now she is hoping to add to the Old Spokes, whose five members made their debut during the Smith Crossing Olympics.

Ten-mile rides are common with the Old Spokes with stops for hot dogs.

Smith Crossing resident Art Tuscher has some ties to the Olympics.

He said his nephew, former Hinsdale resident John Murphy, was a three-time medal winner in 1972 in swimming and was once roommates with Olympic champion Mark Spitz, whom Tuscher has met through Murphy.

Tuscher, who served in the military in Japan, helped other runners break in a cross country course for Japanese athletes to train on.

He said he ran track at Leo High School and played football and basketball in college and baseball in the service.

With such a pedigree, the first event at the Smith Crossing Olympics was a volleyball match in which the participants sat in chairs.
The residents and staff fought to a draw.

In the discus event, John Olson won the gold, Nemec the silver and Tuscher the bronze.

In the javelin throw, Pam Hirschman won the gold, Jim Nemec the silver and Lewis the bronze.

Martino won a gold for archery followed by Bob Kries and Tuscher.

Join us for an event

Join us for a personal tour. Just fill out the request form, and we’ll take care of the rest.

This is for testing purposes